If you are looking for more cinnamon rolls recipes from scratch, then check out my Cinnamon Rolls with Brown Butter Frosting, next!

This content contains affiliate links which helps WhisperofYum.com to provide free recipes. As an Amazon Associate, I earn from qualifying purchases. Thank you for support of the blog, Whisper of Yum!

Wondering how to make those famous TikTok cinnamon rolls with heavy cream? You have come to the right place. Homemade classic sweet rolls that are pillowy soft and the perfect balance of sugar and spice and a traditional cinnamon roll icing–what could be better?

Say “goodbye” to dry, stale rolls and “hello” to this easy cinnamon roll hack that you’ll keep with you for luscious, ultra soft, and moist rolls: pour heavy cream over cinnamon rolls before baking.

What Does Heavy Cream do for Cinnamon Rolls?

Due to heavy cream’s high fat content, adding it to the rolls just before baking adds moisture and acts as a tenderizer to baked treats.

As the cinnamon rolls bake, it absorbs the heavy cream and the fat within the cream contributes to the irresistible softness of the roll.

Ingredients You Will Need for Cinnamon Rolls with Heavy Cream

What’s great about this recipe is that it is made with simple ingredients, most of which you may already have:

Proof yeast by adding it to water and sugar. After about 15 minutes, you will notice a a foamy top, which means the yeast has bloomed.

How to Make Cinnamon Rolls with Heavy Cream

A sweet labor of love, but it is truly worth it! This recipe calls for a decent amount of steps, but I’ve made it straightforward and easy to follow.

If you are new to baking cinnamon rolls with heavy cream, rest assured you are in good hands.

Tips and Tricks for the Best Cinnamon Rolls with Heavy Cream

Making Cinnamon Rolls Ahead of Time

Prepare cinnamon rolls ahead of time. There’s nothing like a morning filled with the scent of freshly baked goodness. What’s great about making them ahead is that all you’ll have to do the morning of is allow time for a rise, pop them in the oven and spread icing on top.

Can cinnamon rolls be made ahead of time?

Yes. Just before the second rise (stop at step 8), cover them in the pan and refrigerate for up to 12 hours before baking. Then let them rise at room temperature, which will take 1-2 hours. Proceed with pouring heavy cream and bake.

Do you put the icing on cinnamon rolls before baking?

Place icing on baked cinnamon rolls. Otherwise, the dough will absorb the frosting as it bakes.

Why are my cinnamon rolls not fluffy?

If your rolls did not puff up while baking, you may have added too much flour to the dough. Be sure to spoon and level flour into a measuring cup for more accurate measuring.

How to Reheat Leftovers

If you need to reheat, simply microwave in 10-second intervals.

There’s a reason these pillowy rolls are loved by all! Leave a comment below and share your love for this recipe on Instagram and Pinterest. We love to see you get down in the kitchen. Thank you for supporting Whisper of Yum and happy eating! 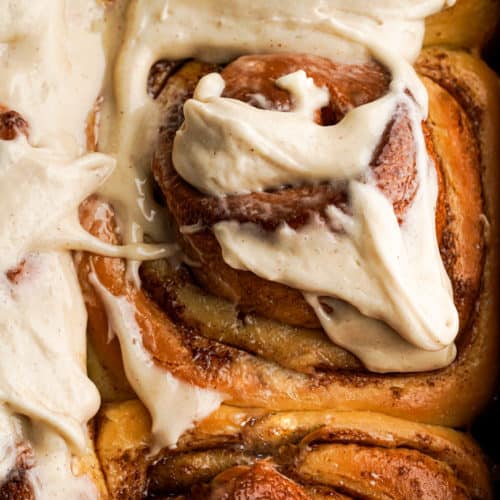 How to Make Mozzarella Sticks

Welcome–I’m Jeri Mobley-Arias; content writer, recipe developer, and food photographer behind Whisper of Yum. This little corner of the internet is dedicated to a compilation of recipes inspired by my Filipino background, comfort eats and travels.